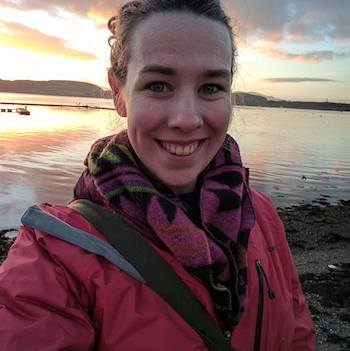 Heidi is now a PhD student working on the EU-funded SponGES project at the University of Bergen, supervised by Hans Tore Rapp and Andy amongst others.

I have always been fascinated by the ocean, especially invertebrates and life in the deep sea. As a kid, my dad and I would explore rock pools and go on fishing trips in the Chesapeake Bay. My favorite pastimes included either being in or near the ocean. When I first learned about the deep sea in High School, I immediately fell in love with the strange and unusual creatures living around hydrothermal vents and whale falls, and I just wanted to know more. However, due to a fear of chemistry and physics (now some of my favorite subjects), I avoided majoring in the sciences and went to school for Film at Montana State University, which definitely did not last very long. After a term, I switched to Undeclared, then German Education, then back to Undeclared. During my second year in Uni, I was visiting a friend in Oregon and fell in love with the state. On the drive back to Montana, I was listening to Jaws the audiobook and decided then and there that I was going to be a marine biologist. Within three months, I moved to Oregon and within a year, I began my education to become a marine biologist at Oregon State University, where my interests in benthic habitats grew. I completed my MSc in Marine Biology at Bangor University, and I am about to begin my PhD at Bergen University on the community and biodiversity of deep-sea sponge grounds in the Arctic.

I investigated the fine-scale spatial patterns of a deep-sea sponge ground on the summit of the Schultz Massif Seamount on the Arctic Mid-Ocean Ridge. For it, I analysed autonomous underwater imagery (AUV) of the sponge ground collected in 2016. I went through through hundreds of images taken by the AUV, and counted and documented the discernible megafauna present and their geolocation. I created a photomosaic from the images and generated a density hotspot map to visualize the spatial patterns of the primary megafauna inhabitants, which to no ones surprise, were mostly demosponge and glass sponge species (Geodia parva, Stelletta rhaphidiophora, Hexadella detritifera, Lissodendoryx complicata). I also looked at the fish species present and how they were using the sponge ground. I even found a cool little whale fall that the team went back to collect in 2017!

I am a mega nerd and love Harry Potter. Rumor has it, I even enjoy going to an event called The College of Wizardry in Poland to live as a nerdy witch for a weekend. Surely nobody is that weird…right?