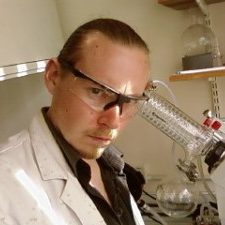 Martyn was a NERC-funded PhD student, and graduated from his PhD in 2016. He now works as a Lecturer in Newcastle University.

Why did you choose to study / research marine biology?

The Sciences always fascinated me from an early age, and I grew up exploring the countryside during the day and watching David Attenborough in the evenings, so natural sciences and biology have been closer to my heart than physics or chemistry. I picked Marine over other biological disciplines because the environment is less-well-understood. I feel that as a marine biologist you’re exploring an alien environment, full of un-charted wonderment. Which is rubbish, because most of us explore beaches full of uncharted crisp-packets and flotsam, but it’s still a giggle.

I’m researching two species of canopy-forming macroalgae, one invasive and one native to the UK. The invasive, Sargassum muticum, is currently outcompeting and in many locations replacing, the native Ascophyllum nodosum. The crux of the work is identifying key differences in the investment each species makes into chemical defence. The bit that interests me (because only weirdos get excited about seaweed) is placing those differences into an ecological context. To do this involves lots of animal behaviour experiments, and observing how those differences manifest in the decisions made by grazers (maybe getting excited about snails is just as weird). In time I hope to build a clearer image of Britain’s future intertidal ecology, as Sargassum spreads across Europe…