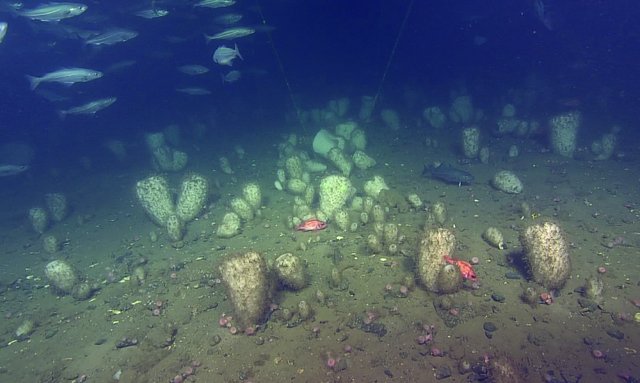 Climate change winner in the deep sea? Predicting the impacts of climate change on the distribution of the glass sponge Vazella pourtalesii

Shallow-water sponges are often cited as being ‘climate change winners’ due to their resiliency against climate change effects compared to other benthic taxa. However, little is known of the impacts of climate change on deep-water sponges. The deep-water glass sponge Vazella pourtalesii is distributed off eastern North America, forming dense sponge grounds with enhanced biodiversity on the Scotian Shelf off Nova Scotia, Canada. While the strong natural environmental variability that characterizes these sponge grounds suggests this species is resilient to a changing environment, its physiological limitations remain unknown, and the impact of more persistent anthropogenic climate change on its distribution has never been assessed. We used Random Forest and generalized additive models to project the distribution of V. pourtalesii in the northwest Atlantic using environmental conditions simulated under moderate and worst-case CO2 emission scenarios. Under future (2046-2065) climate change, the suitable habitat of V. pourtalesii will increase up to 4 times its present-day size and shift into deeper waters and higher latitudes, particularly in its northern range where ocean warming will serve to improve the habitat surrounding this originally sub-tropical species. However, not all areas projected as suitable habitat in the future will realistically be populated, and the reduced likelihood of occurrence in its core habitat on the Scotian Shelf suggests that the existing Vazella sponge grounds may be negatively impacted. An effective monitoring programme will require tracking changes in the density and distribution of V. pourtalesii at the margins between core habitat and where losses and gains were projected.
[sendpaper paperurl=”2021_Beazley.pdf”]